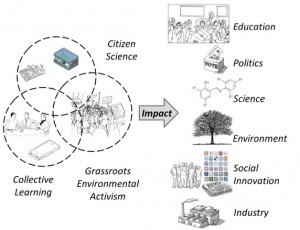 CAPTOR objectives address the general air pollution problem, which will be depicted by monitoring specifically the tropospheric ozone. Ozone is frequently considered a forgotten pollutant, in the sense that it is formed in rural areas through chemical reactions from precursor gases emitted mainly in urban environment.

Therefore, the polluters (the urban population) often do not suffer to the same extend the effects from the degraded air quality generated by their emissions, whereas the rural population has limited influence on the emissions, which degrade the air they breath. Because of this spatial de-coupling of the sources and the effects, ozone (O3) pollution usually receives less attention than that dedicated to other pollutants such as particulate matter, sulphur dioxide (SO2) or nitrogen oxides (NOx).

CAPTOR’s purpose is to foster bottom-up collaboration of local communities, citizens, NGOs, and scientists to raise awareness and find solutions to the air pollution problem. More specifically, CAPTOR objectives are: