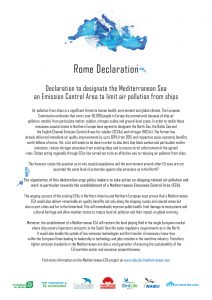 Rome – An alliance of environmental organisations adopted a declaration to designate the Mediterranean Sea an Emission Control Area to limit air pollution from ships. The alliance has been founded as of 2016 and gathers mainly NGOs from Mediterranean region such as Cittadini per l’Aria (Italy), France Nature Environnement (France), Ecologistas en Acción (Spain), Birdlife (Malta), Hellenic Ornithological Society (Greece) but also beyond such as Brussels based Transport & Environment or NABU from Germany. The declaration followed a one day international Mediterranean Shipping Conference on March, 28th in Rome wherefore the name “Rome Declaration” has been chosen.

The initiative appears to be timely after France reportedly undertook a bold attempt to push for a Mediterranean ECA at a European Council working party meeting in early March. Ideally such a step would encompass emission control areas for sulphur (SECA) and nitrogen oxides (NECA) likewise but also explicitly address particulate matter and black carbon emissions.

NABU CEO Leif Miller:”The designation of the Mediterranean Sea is a long overdue step to reduce air pollution from ships in the region significantly. It is unacceptable that people and the environment in Southern Europe still suffer from the marine sector’s exhaust gas emissions while the Baltic Sea, North Sea and English Channel have much tighter standards in place since years.” Miller said environmentalists and community groups in port cities from various Mediterranean countries very much welcomed the latest initiative from the French government and urged their governments to step up the plate and to support this approach.

Campaign spokesperson and transport policy officer Daniel Rieger said: “We cannot accept any excuses for a further postponement of tighter emission standards for ships in Southern Europe as major shipping routes from Asia to Europe cross the Mediterranean Sea and ship traffic is expected to grow by up to 250% until 2050. Moreover we face a situation where the region is home to some of Europe’s most popular cruise destinations with a steadily increasing number of calls and subsequent local air pollution problems. Also intense solar radiation, especially during summer time, in combination with air pollutants causes health damaging smog and ground-level ozone.”

The establishment of a Mediterranean ECA would restore the level playing field in the single European market where ship operators and ports in the South need to face the same regulatory requirements as in the North. It would also stimulate the uptake of low-emission technologies and transfer of necessary know-how within the European Union thus enhancing leadership in technology and job creation in the maritime industry.

Find more information on the Mediterranean ECA project on: www.NABU.de/mediterranean-eca

Documentation of the conference can be found here: http://en.nabu.de/issues/traffic/22144.html 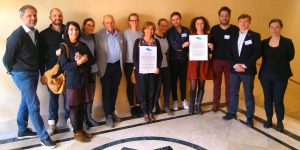